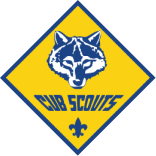 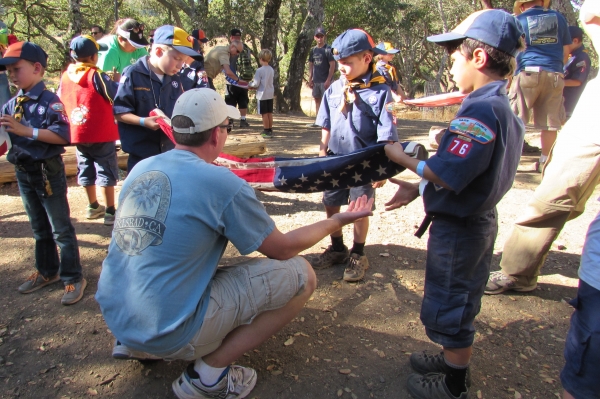 Have the color guard in the back of the room, ready holding the flags. The US Flag is on the right, then State flag (if used), then Pack flag on the left as the color guard is facing towards the front of the room – or, US Flag in front, followed by State, then Troop flag.  Flags never touch the ground and are not played with.  Scouts show respect by taking their roles seriously and not goofing off.

The predetermined Scout walks to the front of the room and face audience.

Scout: “Will the Audience please rise?

Scout: “SCOUT SALUTE. Those not in uniform, please place your right hand over your heart. ”(**say this right away, as the audience will salute the flag as it’s being marched forward**)

Scouts carry the US & Pack flags walking double file.  US Flag crosses in front of other flags to left-most flag stand (as viewed from the audience), then State flag advances, then Pack flag on the opposite side. Wait for flag bearers to move to the flag pole stands.

Scout: “Please join us in the Pledge of Allegiance.”
“I pledge allegiance to the Flag
of the United States of America,
and to the Republic for which it stands:
one Nation under God, indivisible,
with Liberty and Justice for all.”

Scout: “Color guard, Retreat.”
The color guard walks back out double-file to wait at the back of the room.

Scouts and color guard return to their seats.

Notes: A Den Leader can fill in if no boy is comfortable leading the ceremony.
You salute any time the US flag passes and until it is out of sight.